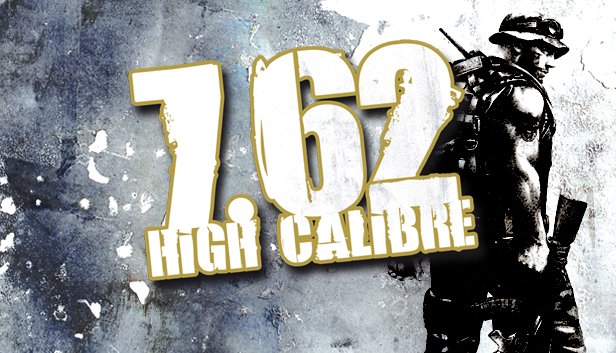 7,62 High Calibre is a strategy game with a bizarre collection of different game elements. You have an extensive campaign with skills and experience, similar to a typical RPG. You also have combat that happens in real-time, but can be paused to give orders to your party, similar to games like Pillars of Eternity. Then you have the in-depth combat system that models individual bullets with dozens of different variables, which would make sense in a hardcore simulation game. 7,62 High Calibre manages to blend these pieces into one of the most unique games I’ve ever played.

7,62 High Calibre is both fantastic and terrible. It is exceptionally janky, as well as poorly translated from Russian. It is so buggy that the steam version comes with multiple mods available for installation because the vanilla version of the game is nearly unplayable. For this review, I will be focusing on 7,62 High Calibre with Blue Sun Mod and Mercapocalypse. When you buy the game on steam you also receive 7,62 Hard Life, which is a modded version of the game, which also has seperate mods for it. I won’t touch on 7,62 Hard Life, simply because it is a very different game and requires its own review.

Even when it comes to graphics, 7,62 HC is a blend of awful and great. The graphics themselves actually look quite bad, especially when combined with the stiff and unnatural animations. Yet there is also a bizarre level of detail in which attaching a flashlight to your gun will make it show up on your gun’s in-game model. This applies to nearly every part of the game, from what vest you are wearing, what pouches you have around your waist, how large of a magazine your weapon has. Most strategy games simply tell you that your weapon has a special attachment but 7,62 HC shows it. This carries over to the ballistic modeling, where a fragmentation grenade will actually explode into fragments, which are each individually modeled. A “normal” strategy game would just check if your character was in the predefined blast radius of a grenade, then decide if you should take damage from it, but 7,62 goes above and beyond. It’s amazing to see a grenade explode and have your character narrowly escape death because they laid down and avoided most of the shrapnel, or to see a perfectly thrown grenade wipe out everyone in a confined room. Bullets are modeled as well, even allowing for ricochets and accidental hits. You can try to quickly shoot at someone from the hip, but you can miss and hit somebody else with the bullet. It adds a ton of realism to the game, without sacrificing fun.

7,62 also has an abundance of content, in both quests/missions and gear to outfit your mercenaries. There are thousands of weapons and pieces of gear for you to find or purchase, much of it coming from either Blue Sun Mod or Mercapocalypse. The variety of weapons is fantastic, especially when combined with the different rarities of individual weapons. You can find rare, bizarre weapons that might be amazing, but they might also be chambered for a rare round, requiring you to buy expensive ammo for it. You can also use common weapons chambered for your basic 9mm, 5.56, or 7.62, allowing you to scavenge ammo from your enemies rather than buying it. Weapons all fill different roles, so you can always find a use for anything. You can outfit one mercenary as a building sweeper who specializes in using shotguns in close quarters, while a different mercenary can be a long range expert with a high caliber sniper rifle and a magnified scope. You can have an explosives expert, a spotter that focuses on a lightweight kit to stay maneuverable, or a soldier loaded up with ammo and an LMG to suppress enemies in cover. Even melee combat is supported, although it obviously has limited uses in a game that so heavily involves firearms.

When it comes to the quest system, 7,62 HC is, as expected, weird and confusing. Quests do not have waypoints or a way to track them on the world map. Instead, you have to figure out what to do based on the in-game text. This is especially difficult thanks to the game’s poor English translation. Thankfully, you can usually find the answer online.

The game’s story has a good setting but the details can get pretty weird. The basic setup is that you are a mercenary hired to find a Russian oligarch who has fled to a fictional South American country. It gets fairly convoluted as you progress through the plot, but as long as you treat it as a fun ride rather than a serious drama, you should enjoy it. The writing is awful, but it’s hard to tell how much of it is because of the translation.

7,62 High Calibre’s biggest draw is the combat system. It is exceptionally detailed, far past what is generally considered “necessary” for a strategy game. There are so many small details that help add depth to the game. There is a weight system, but it isn’t a generic copy of what every game does. Instead of having a max weight that you can’t go over, you have a weight midpoint, in which your character is unaffected by how much weight they have. You can give them more stuff, which will slow them down and make them tire out easier, but they don’t have a real max weight, they just have a max weight where they will become effectively useless as a soldier. You can also give them very little to carry, allowing them to use up less energy and move faster. There are no hard cut-off points, so even removing a single item can speed up a soldier by a fraction of a second. The bullet simulation mechanics are even more detailed, with weight, force, velocity and ammunition type all being factored into the equation. Some ammo, such as hollow point, is far more effective against unarmored soldiers due to it’s physical design. Ammo with a high velocity will perform better at long ranges than ammo with a low velocity. Some ammo might have a lot of force, allowing you to stun enemies, even if the ammo can’t pierce their body armor. There are thousands of different types of ammunition for you to find and experiment with, from your standard 9mm to explosive 7.62 rounds.

A large portion of 7,62 HC is about freedom of choice. You decide which path you want to go down with regards to the main quest. You decide what strategy each of your soldiers will specialize in. Every play style is supported in some way, allowing you to do what interests you, rather than what the game wants you to do.

Given how great a lot of the game is, I would strongly recommend 7,62 High Calibre to any strategy fan, with a few important caveats. First, you need to understand that the game is unfinished, clunky, and buggy. It will be frustrating at times and difficult to play, at least until you get a hang of the controls. I would recommend rebinding the majority of controls, simply because most of them don’t feel intuitive. Secondly, the game is not about balance. Some weapons are far superior to other weapons. 7,62 HC usually leans more towards realism than game balance, so expect some weapons to be worse in every way compared to other weapons. There is an excessive amount of depth in 7,62 HC, so it can be overwhelming. Still, buried in this mess of a game is some of the best strategic gameplay I’ve ever experienced. It frequently goes on sale for $1, and is worth a shot for anyone that enjoys deep strategy games and doesn’t mind a game being rough around the edges.